The past never stays in the past. The pain, guilt, and darkness still flow through my veins and itch to come out. I’m not proud of my secrets, but I have never felt shame either…until her.
Emma makes me feel things I thought I’d become immune to. She makes me want to see light, to rid myself of my demons and it terrifies me.
There is so much from my past she doesn’t know. I told her I wasn’t good for her, that I’d ruin her, and I vowed to stay away. But I can’t get her off my mind.
I need her.
I need her in more ways than I knew were possible for me.
She is my saving grace and I’m ready for redemption.

J.M. La Rocca was born in Chicago, IL. At an early age, her family relocated to lower Alabama where she began her love for writing. She currently resides in Pensacola, FL with her husband and twin sons. As a stay at home mom, La Rocca was able to pursue her love for writing. It was always an unrealized dream to write her own books. With the love and support from her husband Tony, family, and friends, she set forth and fulfilled that dream. Aside from writing she also loves to read, listen to music, drink wine, indulge on chocolate, chase her little ones around, and spend time with her family and friends.
Website * Facebook * Twitter

Posted by Islandloveliesbookblog at 08:30 No comments: Being someone's first love is unforgettable. Being their last is immeasurable.

Claire Peters should be on top of the world. She owns the radio waves and has a budding movie career. But her heart longs to be rooted. Ten years ago, she fled Martha's Vineyard to pursue her dream and to make something of herself. But there’s still a void. After a decade of running, she returns to the island hoping to find her happiness with the man she’s loved all her life.

When a tragic event shatters Dr. Forrest Desvareaux’ well-balance world, the Vineyard’s hometown good guy discovers everything in his life is based on lies. Angry and betrayed, he turns to Claire - the one woman who has indelibly marked him.

Is it possible to run back to the person who broke you? Forever linked, Forrest and Claire are an unending continuum. But she’s a wildflower and Forrest’s roots run deep on the Vineyard. Can they accept home is not a place but a feeling?

“To err is human; to forgive, divine.”
I received an ARC from the author, Mika Jolie, for Tattooed Hearts. This is my first time having read one of her works, and I cannot wait to read more! Though this is the third book in her Martha’s Way series, it was easy to read this as a stand-alone novel.

This full-length erotic romance kept me fascinated until the very end. The characters were well developed, with details being revealed throughout the book. The location was perfect, and the plot was different from anything that I have read yet! I loved that the reader is able to see into both sides of the relationship with the author giving us chapters, or at least portions of chapters in the minds of both of the main characters. The supporting characters, a shared group of alpha “big brothers” (and later their love interests), and the other members of the family provide wonderful background and keep the two love birds connected over the years.

Forrest is a “have”, Claire is a “have not”. Though they’ve grown up together on the vineyard, Claire is the high school-aged daughter of the Montgomery family’s maid. Forrest is the son of a prominent family, and he’s leaving for Med School. Can they make a relationship work? Claire decides that after running off 10 years early, it’s time to figure out if the feelings that she’s had for the past decade are worth fighting for. “Sometimes not being in control is the most beautiful thing in the world.” First loves, young love, loss, coming of age and finding oneself. These are just a few of the themes found in this wonderful romance.

Posted by Islandloveliesbookblog at 01:48 No comments: 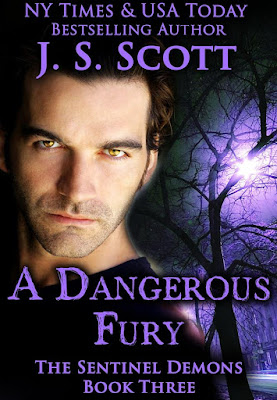 Hunter Winston has only one goal in life: to kill as many Evils as possible.
When Hunter is sent on a mission to find a mysterious female who can help the Sentinels finally win their battle against the Evils, he’s not happy about the errand interrupting his constant compulsion to kill the red-eyed, ugly evil demons.  But he owes his brothers and their Sentinel king his life, so he hopes he can get the task done as soon as possible and return to his solitary life of wasting Evils again.  How complicated can retrieving a single female be?  Hunter is about to discover that a simple mission can become very…complicated!

The goddess, Athena, has been held prisoner for thousands of years. The time of the gods is long gone, and she’s ready to go to her final rest as soon as she knows the balance between good and evil is restored.  Unfortunately, that isn’t what the Fates had planned for her thousands of years ago, and Athena has to make a choice that will affect her existence for eternity.

Other Books in the series

A Dangerous Bargain - Book One 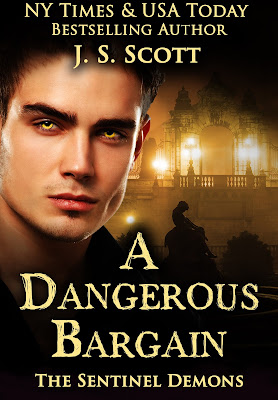 The first book In The Sentinel Demon Series, a paranormal romance by NY Times and USA Today bestselling author J.S. Scott.
27 year old Kat Larson is haunted by demons. Literally. And how was she to know that there was more than one type of demon? The Evils want to destroy her soul, while billionaire Sentinel demon, Zachary Winston, claims that he wants to protect her. Kat opts for Zach’s protection…but it doesn’t come without a price. It requires a demon bargain…and what he suggests surprises poor Kat almost as much as the fact that demons really do exist. Why would the handsome billionaire want to make such an agreement with a curvy, plain redheaded woman like her?
Billionaire Zachary Winston has a mission and it’s one that he vows to complete. As a Sentinel demon, his task is to protect Kat from the Evils that will corrupt her soul. His only problem is that she is his “radiant,” the one woman who can lighten the darkness of his demon existence and be his eternal mate. Zach has to fight an internal war between man and demon as he protects Kat, not quite sure which one will win. He’s one part demon, one part man, but they both yearn for Kat’s lush, full figured body and kind, compassionate heart. As Zach becomes more and more enchanted with Kat, he’s hoping she can learn to love a lonely man/demon that’s only slightly wicked.
This paranormal romance contains graphic language, steamy love scenes, and lovable alpha males that also happen to be mythological demons.
Purchase Link 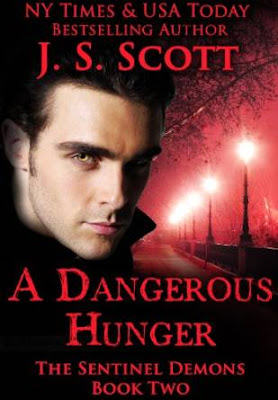 Dr. Talia Maris had lived her entire life as a freak—a too tall, too plain, too odd woman who sees and senses the presence of otherworldly entities. A total recluse, Talia spends all of her time on her research, living a contented, quiet life with only her loyal feline companion for company. Until that sedate existence comes crashing down around her when she starts being pursued by demon Evils. And if there’s one thing she hates…it’s demons. She ditches every one of them until Sentinel demon, Drew Winston, finally wins the game of pursuit by trapping her with a deceitful, underhanded trick. Not only is she infuriated by Drew’s stunt, but when he tells her she’s his mate, Talia wonders if the too handsome, too tall, too sexy Sentinel demon needs some serious psychological help. All she wants is to get rid of Drew as quickly as possible! But the stubborn Irishman isn’t budging, and her resistance slowly crumbles as she gets pulled deeper and deeper into the world of the Sentinels by the relentless attempts of the Evils to capture her. And what is she supposed to do with Drew Winston, a Sentinel demon who would do anything, even sacrificing his own life, to protect her?
There are two things Drew Winston loves about his life: being a billionaire Sentinel demon and food. He loves having everything he wants, and he’s perfectly happy slaying Evils and rescuing unsuspecting humans, until the irritating Dr. Talia Maris evades him one time too many. Yeah…sure…maybe he was a little devious in the method he used to finally meet her face-to-face, but he ends up being the one who is actually surprised when he discovers the elusive woman is actually his mate. Worse yet, she’s being pursued by ancient Evils, and it brings every protective instinct he has to the surface, making him want to kill anything that might hurt Talia. Maybe Drew had never wanted or expected a mate of his own, but once he has Talia in his grasp, he’s determined to keep her safe and make her want to stay with him forever.
18+ Plus Only. Not intended for Teens. 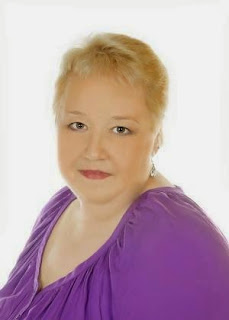 J.S. Scott is a New York Times and USA Today bestselling author of steamy romance. She's an avid reader of all types of books and literature. Writing what she loves to read, J.S. Scott writes both contemporary steamy romance stories and paranormal romance erotics. They almost always feature an Alpha Male and have a happily ever after because she just can't seem to write them any other way!

Posted by Islandloveliesbookblog at 03:00 3 comments: