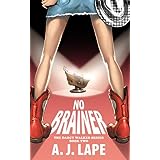 Two weeks before junior year, Darcy hops a plane to Orlando for a little R&R with her best friend Dylan and his family. Fresh off the heels of solving three murders in Valley, you'd think she'd sit back and enjoy the vacation capital of the world … maybe if you're a noun. Darcy Walker, however, is nothing but verb.

Before her feet hit the Orlando soil, she's meddling in the disappearance of a five-year-old boy who vanished six months earlier.

With authorities still no closer to solving the case, Darcy is shanghaied by her impulsivity and runs headlong into that proverbial burning building, convinced she can bring him home.

She travels down a road that not only follows this missing child but branches off into the corrupt and sinister world of mob activity when she tampers in a case on which Dylan's detective grandfather is working.

After a near disastrous midnight meeting in a warehouse and a date with a mechanical bull, Darcy realizes she might've bitten off more than she can chew. Add the boiling flirtationship with her best friend and the appearance of his romantic rival, and she is in over her head.

Will she survive a life of flirting with death too easily? Or will her flirtationship with Dylan become the actual death of her instead?

For a girl with a habit of finding dead bodies, No Brainer gives Darcy Walker more of the same…surprising twists and turns…and running for her life.

This is the second book in the Darcy Walker series, and for me this book was even better than the first.  As much as i enjoyed the first book i thought this book was fantastic, had me laughing out loud as the character of Darcy is hilarious.

The relationship between Darcy and Dylan takes a different direction one that she wants yet is very unsure as to how to take that next step with neither of them saying how they feel,  you forget when reading this book that it is YA because the whole theme is so grown up, its only when Darcy says something funny that you think oh wait yes she is fifteen.

The thing i love about Darcy is that she is so strong, the things she deals with and sees would bring a full grown man to his knees,  yet she doesn't bat a eyelid.  if i was 15 again and i had read this book i would want to be as strong as her.

The Series is funny and i cannot wait to read the third in the instalment and get more darcyisms, because the things that come out of her mouth are shocking yet hilarious at the same time.

I give this book 5***** as i really did enjoy it and highly recommend it.


The overwhelming taste of mold feels like a man’s hands squeezing around my throat. It’s hard to breathe sometimes—being alone like this—but the squeaking of the rats in the walls is the only thing that keeps me alive. I had a pet rat once. His name was Reaper. He used to sleep with me and was extremely smart and adaptable. I went away for a week, and my family forgot to feed him. I guess he got hungry because he crawled out of his cage and looked for dinner in my little brother’s crib. It wasn’t Reaper’s fault. He was driven by circumstance … just like me.
My breathing hitched in my chest as I quickly stuffed the letter back inside the Lucasville Prison envelope. This wasn’t the time to dissect my fifth correspondence from a cold-blooded killer. Eddie Lopez, who’d attempted to murder me last spring, had aspirations of making me her jailhouse pen pal. I’m not sure why I read her letters, but even with several life-in-prison sentences, she still scared the bejeezus out of me. Why? I’d come to believe she was part cockroach and would survive a nuclear war. She’d been whisked into the back of an ambulance with various tubes going into her body, presumably bound for the graveyard.
Somehow, she’d survived.
All I knew was, I’d always be watching my back, death row or not.
I briefly buried my face in my hands, my breath choking me with the memory. Outrunning a murderer wasn’t something you filed away as the forgettable—you simply prayed your subconscious learned to deal. Unfortunately, I’d just encountered another crime scene that I’d have to process in the recesses of my mind.
The scene looked like any other. Everything remained a clue until proven otherwise, but things were just as I’d left them. The only items in my room out of place were two dead bodies splayed across the carpet. Rigor mortis had already set in—still I fumbled helplessly with the body parts and tried to piece them back together. After five heart-pounding minutes, I realized I couldn’t resuscitate or sew back together what had been a catastrophic event.
Death was final. I knew that better than anyone did.
I’m Darcy Walker, and I fear death will always follow me. I’d been here before—when I was too young to understand—and it sucked just like the previous time. I grew up feeling responsible for things that technically weren’t my fault, and now Fate had given me something else I could add to the list.
Never try to outrun Fate, I told myself.
It had a way of letting you know it had plans you couldn’t change

Loved this quote from the book


“Why is talking in the dark just so…”
“Intimate?” he murmured.
I would’ve chosen “raw,” but intimate worked. “Yeah,” I agreed.
“I don’t know, sweetheart. Maybe because all you have are your thoughts. It’s just you and the other person’s—”
“Heart,” I now interrupted.
Dylan released a soft sigh, pulling me even tighter to his body. “My thoughts exactly,” he whispered. “The face draws you in; the heart makes you stay. And you have a warm and beautiful heart that I love very much.”
All I could think was ditto, ditto, ditto.

If you could work with any author who would it be?
Oh, jeez, can I pick, two? Hands down, JR Ward and Karen Marie Moning.

Who is your favourite author, and is you writing style similar to theirs?
See the answer to number one. I aim for my writing style to be similar. Ward and Moning have very strong female characters, plots that are out of this world, and gritty dialogue. Both have a touch of humor that is an awesome counterbalance to the bat-poop crazy stuff they do plot wise.

When naming your characters, do you give any thought to the actual meaning?
Yes…I very rarely pick a name just to pick a name. I’m all about the symbolism.

Who are your target readers?
Grade A Stupid is Young Adult, but Darcy has garnered quite a huge adult audience that has thrilled me to no end. My goal is to write her in such a way that anyone can identify with her. So far, so good.

What are the major themes of your work?
Never, ever, ever give up on anything. Darcy is a pit bull when she wants something. She doesn’t give up until it’s hers. I hope readers walk away from her adventures realizing they can accomplish anything when they put their minds to it, and even if you’re wired differently than everyone else, then own it…own it, and don’t let anyone tell you that you’re subpar.

Any recent works that you admire?
Karen Marie Moning just released ICED…a continuation of her Fever Series and that story is still playing on a loop in my brain.

What do you think people search for in a book?
To escape…and while you escape you have a little bit of fun and hopefully walk away with fictional friends that you wish were real.

How have your personal experiences affected your writing?
Absolutely some of it is personal experience. High school and junior high sucks all kinds of sucky…pardon me, but that’s true…LOL. Nothing is off limits with Darcy so if someone tells me a story, and it’s a good one, chances are it’s going to find itself on the pages of a future novel.

What genre of books do you like to read? Do you limit yourself to only the genre that you write yourself?
No limitations here. I like YA, paranormal, urban fantasy, romance…whatever I’m feeling at the time.

Were you always good at writing?
I majored in English and Journalism in college so I always had a pencil in my hand. On Friday the 13th, 2008, Darcy Walker started screaming at me and hasn’t stopped since. So, it’s fun to actually write on a daily basis.